Emirates Old Trafford is delighted to announce a second night at the venue has been added to Harry Style’s world tour on Thursday 16 June 2022.

Tickets for the additional concert will go on general sale tomorrow (28 January) at 9am, along with remaining tickets for the 15 June 2022 concert.

Styles will kick off his colossal 32-city outing with three brand new stadium dates in the U.K. in June, and a further four stadiums in Europe including a brand-new show at Glasgow Ibrox Stadium, Manchester Emirates Old Trafford and London Wembley Stadium through June.

TICKETS: Tickets go on sale for Harry Styles’ Love On Tour 2022 9am on Friday 28 January at LiveNation.co.uk 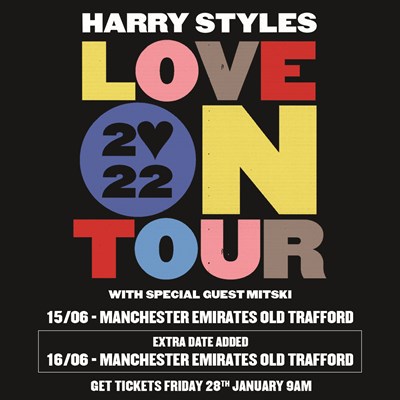