A striking new work of street art, by AkseP19, has been unveiled by Manchester Originals ahead of the launch of the brand new sports competition, The Hundred.

The imagery on Barlow Moor Road, Chorlton, created by legendary Manchester graffiti artist AkseP19, shows two of the international stars who will be turning out for Manchester Originals in this year’s competition – Matthew Parkinson and Harmanpreet Kaur.

Parkinson, 24, a spin bowler from Bolton, will be hoping to shine for his local team, while India IT20 captain Kaur, 32, is a global star and will be bringing her all-round skills to the women’s side.

The Hundred - a brand-new 100-ball cricket competition where the Originals will compete against seven other new teams in men’s and women’s competitions - will see sport and entertainment collide on a scale never seen before. 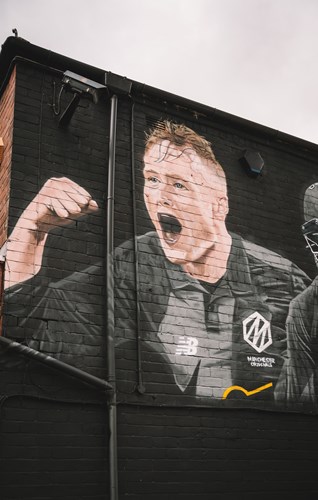 Featuring world-class cricket – with some of the best cricketers from England and around the world - and a strong line-up of live music, curated by BBC Introducing and including Wigan’s The Lathums, it promises to be one of the must-see events of the summer.

The artwork by AkseP19, which took seven days to complete, also features Emirates Old Trafford the home ground of Manchester Originals. The mural is latest by the Manchester-based artist who has created spectacular portrayals of George Floyd, Sir Captain Tom Moore and Marcus Rashford across the city.

Matt Parkinson, who has featured for England’s Men’s One Day and T20 international sides, said he’s excited by the prospect of featuring in the new format and thrilled to see his portrait included in the artwork.

He said: “To be drafted for my local team in the inaugural competition is really special. We have some amazing players throughout the side and the wider competition, every game is set to be must-see.

“The mural AkseP19 has created is incredible. It’s quite surreal seeing yourself up on the wall like that, but as a local lad, I’m proud to be representing the Manchester Originals, both on the pitch and as part of this mural. I can’t wait to get started.”

Adding extra tension to proceedings for Parkinson is that he will be facing his twin brother, Callum, in the competition as he turns out for Leeds-based Northern Superchargers – the brotherly rivalry will play out on 28 July at Emirates Old Trafford.

“It’s already going to be a great competition and the opportunity to face my brother in a match will just add to that experience, I can’t wait!” he added.

Kaur, who has more than 200 caps for India and captains their IT20 side, said she was proud to be a part of the history-making competition.

“This is a really impressive group of players to be alongside and it’s going to be a special experience”, she said.

“We’re excited to be playing in front of crowds again and to put on a show for them. The mural looks fantastic, and it’s an honour to be included. It will help create even more buzz around the competition. I can’t wait to make history and play in the first game of The Hundred at the Kia Oval on the 21  July.”

Manchester Originals’ first home game of The Hundred will take place at Emirates Old Trafford against Birmingham Phoenix on 25 July. Tickets allow spectators to watch both the women’s and men’s game.

For more information about The Hundred and to buy tickets visit thehundred.com.