Lancashire Cricket is delighted to announce that the Club has won ‘Leading Live Event of the Year’ and ‘Leading Sporting Venue of the Year’ in the This Is Manchester Awards 2019 at the Hilton Deansgate last night (Monday 11 November).

The accolades celebrate the success of the India vs Pakistan fixture during the ICC Cricket World Cup, the biggest rivalry in global sport which attracted a TV audience of over one billion, as well as the biggest summer of cricket in the Club’s history, which included six ICC Cricket World Cup fixtures, an Ashes Test and Lancashire’s record breaking domestic Vitality Blast campaign which saw attendances increase by 34% at Emirates Old Trafford.

India vs Pakistan is the biggest, most highly anticipated cricket match in the world, only taking place in ICC competitions every two or four years due to the political unrest surrounding the countries, and ticket applications were at a record high for this fixture. 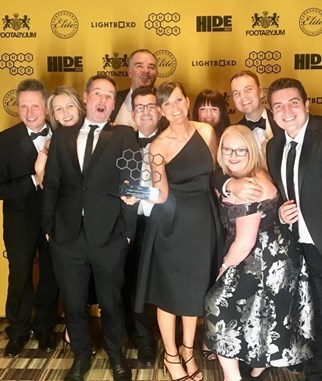 Daniel Gidney, Chief Executive at Lancashire Cricket, said: “I’m delighted that we have won two awards, not only for Leading Live Event of the Year, but Leading Sporting Venue of the Year too.

“We’ve undoubtedly had our most successful and busiest year to date in 2019. The India vs Pakistan fixture is the biggest in global sport, and for this fixture alone we had over 600,000 ticket applications. The north west is a hub for global sporting stadiums, including Manchester United Football Club and Manchester City Football Club, which attracts hundreds of thousands of visitors each year and it’s fantastic to have been recognised for the phenomenal year that we have had here at Lancashire Cricket.”

The ICC Cricket World Cup brought over 140,000 spectators through the gates over the course of three weeks in June and July, and many thousands more to the area of Manchester which significantly boosted the local economy and put the region at the forefront of the international sporting media.

As a whole, the ICC Cricket World Cup is estimated to have boosted the Greater Manchester economy by £32million, with the Ashes Test attracting over 115,000 spectators across the course of five days, the second highest attended Test match in Lancashire’s history.

Daniel continued: “Over the course of the next five years, which begins with matches against Pakistan and Australia in 2020, Lancashire Cricket will welcome over one million fans to Emirates Old Trafford.

“The Club has a desire and vision to be the best both on and off the field, and these awards are testament to the success, hard work and dedication of our staff and team.”

The awards follow on from the Club’s recent success in the Sports Business Awards, which saw Emirates Old Trafford win Best Non-Match Day use of Venue for the unique concert view packages which were launched in 2018 for the Liam Gallagher concert.