‘Best Beds in the House’ shortlisted for top sponsorship award

Lancashire Cricket Club and Hilton have been shortlisted in the category of ‘Event or Competition Sponsorship of the Year’ at the BT Sport Industry Awards for its ‘Best beds in the House’ activation during last year’s major international and domestic match days at Emirates Old Trafford. It follows the same activation being shortlisted at last week’s European Sponsorship Association Awards in London, with Mastercard’s sponsorship of the UEFA Champions League eventually coming out on top.

The activation is one of six shortlisted for the ‘Event or Competition Sponsorship of the Year’ alongside submissions from the likes of Cadbury and The Premier League, evian and Wimbledon and Samsung’s sponsorship of Tough Mudder, amongst overs.

The partnership activation was aligned with the opening of the new 150-bedroom Hilton Garden Inn hotel at Emirates Old Trafford in the summer of 2017, where the Club was able to create an exciting experiential space, ideally located adjacent to the pitch and directly in front of the hotel itself. 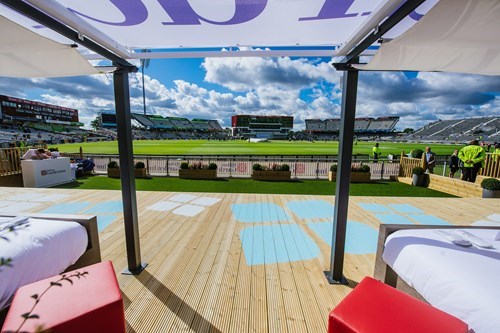 The activation was launched at the Lancashire vs Yorkshire T20 Blast fixture last year and then formed part of the fan experience at all televised domestic and international fixtures at Emirates Old Trafford in 2017, creating a totally unique and eye-catching concept that enhanced the fan experience for lucky fans through social media engagement and Hilton customers.

Winning guests, who had entered through a social media competition, were able to watch the game from the comfort of a HGI king size bed while being treated to a complimentary private bar and room service menu.

Justin Hopwood, Lancashire Cricket Club’s Sales and Marketing Director, said: “We’re delighted to be shortlisted alongside some of the biggest brands in sport including Wimbledon and The Premier League. We are very proud of our partnership with Hilton, which focuses on innovation, alignment with the Hilton Garden Inn, and doing something different to support in the achievement of both Hilton’s and our objectives.”